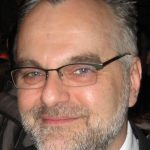 JAMES A. ROCCO is the co-founder of Thirty Saints Productions, which created The Broadway Songbook® series for seven seasons at Ordway Center.  Together with Broadway Asia, Thirty Saints toured Joseph and the Amazing Technicolor Dreamcoat® to Tokyo and led the artistic team for the US Air Force’s 9/11 tribute video; There Are No Words, seen by millions of viewers on 9/11/2016.  Thirty Saints is an investor in the current Broadway, National Tour and Toronto productions of Come from Away and Magic Mike Live in London.

Most recently, James was an Associate Producer at The 5th Avenue Theatre, where he developed video content, line produced New Works and handled touring Broadway bookings. From 2005-2017, he was the VP of Programming and Producing Artistic Director at Ordway Center for the Performing Arts.  At the Ordway, Mr. Rocco presented and booked the best of touring Broadway with productions like August, Osage County, An American In Paris, Kinky Boots, Les Misérables and more.  He produced and/or co-produced award-winning theatricals like In The Heights, Love, Janis, Cabaret, West Side Story, White Christmas, Beauty and the Beast, Cinderella, Jesus Christ Superstar, and Grey Gardens. As the Ordway representative and member of the Broadway League and the Independent Producer’s Network, he was a producing partner and investor in Fun Home, Something’s Rotten, Legally Blonde, The Color Purple, Monty Python’s Spamalot and others, as well as serving on the IPN’s Governance Committee.

In 2019, he was recognized by The Broadway League and The Coalition of Broadway Unions and Guilds for 30 years of dedication, craft and contribution to theater.

Currently a member of the National Alliance for Musical Theatre, he serves on the Alliance’s New Works committee.  Rocco commissioned the holiday musical A Country Christmas Carol and was part of the creative teams behind the off-Broadway cult hits Nite Club Confidential and Streakin’! His re-versioned stage productions of Singin’ in the Rain has been seen around the world.  Before to joining the Ordway team, Rocco was Producing Artistic Director of Lyric Theatre of Oklahoma where he initiated and assisted in a three-year re-organization plan for Lyric’s financial recovery and planned the company’s move to a larger and more prominent facility.

On Video, he was the Executive Producer, and Co-Director of the Regional Emmy Nominated Documentary, The World We Create and directed the television Musical, Born of A Dream.  For Mitsubishi/ArtSphere, he created the stage and television spectacular, Galaxy Express 999.

Rocco’s theatrical career started at three-years-old, as the youngest member of the (Art) Linkletter Totten Tots! He appeared in Oliver! with Ray Walston and Jules Munschin; Carousel as Enoch Snow Jr, with John Raitt; and as Sheppard in Sidney Lumet & David Merrick’s thriller, Child’s Play.

James produced his first show in New York at 16 (Henry, Sweet Henry, at the Mercer Arts Center and the Lamb Theatre).  As a performer, he appeared in the original Broadway production of Cats (as the Rum Tum Tugger), the International and TV Ashai Productions of Duke Ellington’s Sophisticated Ladies; sang back up for Frank Sinatra and was lead singer for Herbie Hancock and the Super Sounds.

His freelance work as a director/choreographer includes award-winning productions of: 33 Variations, Grey Gardens, Singin’ In the Rain, Yankee Doodle Dandy (World Premiere), Sweeney Todd, The Wizard of Oz, Chess, She Loves Me, Violet, South Pacific, White Christmas, As Bees in Honey Drown, A Little Night Music, Songs For A New World, In The Heights, Damn Yankees, Pirates of Penzance, Guys & Dolls, On the Town, A Christmas Story, Annie, Jesus Christ Superstar and many more from classic repertoire to world premieres.