Featured Video: an interview with writers of CITY OF LIGHT 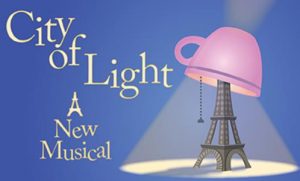 An interview with Gabrielle Wagner (book) and Julie Weiner (lyrics) - two-thirds of the collaborative team (along with composer Jan Roper) of the new musical CITY OF LIGHT, developed through the NMI Full Length Curriculum. This interview is part of a series with producers and writers of new musical theatre, originally streamed live during the 2017 Stages Musical Theatre Festival.