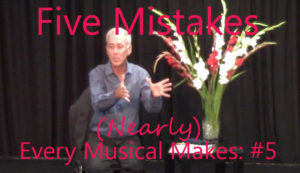 Visit our YouTube Channel at to check out NMI’s newest Featured Video, Five Mistakes (Nearly) Every Musical Makes. NMI’s Executive Director gave an inspiring lecture at the 2018 Conference for musical theatre writers and we’re now releasing it, mistake by mistake. Scott says: “I’ve been attending feedback sessions for umpteen-dozen years now, and there are at least five mistakes pretty much common to all of them. With some work, I think they’re all avoidable.” In this segment, Scott warns about Mistake #5 (we’re counting down to #1): “Unpolished Craft!” Quick overview of musical form structures, rhyme, prosody, euphony, etc…concluding with making sure how to capitalize on the one chance you might have with a producer.