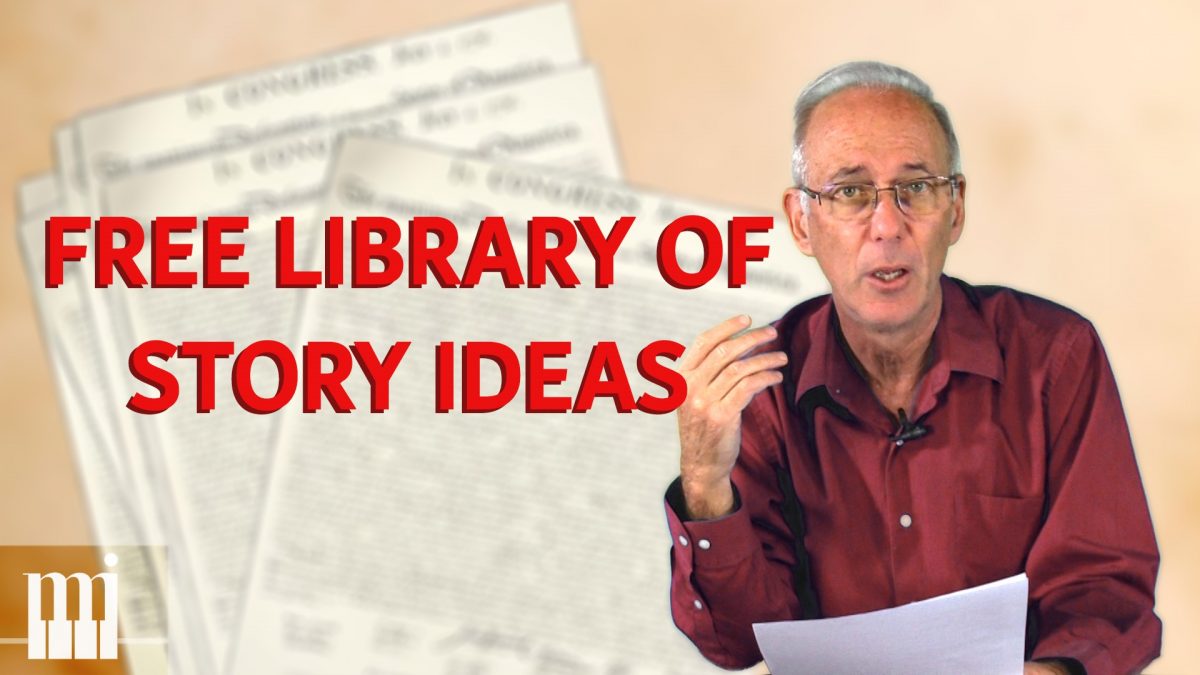 For the past several years, the staff at New Musicals Inc. has been culling promising ideas for musicals from the Library of Congress, the Gutenberg Project, Best Short Stories anthologies, and our own private collections.  On this page you’ll find a teaser of the hundreds of texts in the library.  If you want to see the full library, just fill out the form on this page.


With the year 2020, there are lots of works which have just entered the public domain, and you’ll find a bunch of them at our online Library of Ideas…

There are also hundreds of new fables by the cynical Ambrose Bierce, and the sweeter Jean De Fontaine.  (Bonus:  Fontaine’s fables are already in verse, giving you a head-start on lyrics.)

There are plenty of ideas in our library, suitable for adapting for 10-minute musicals, one-acts, and full-lengths…of every genre from spooky stories to dramas, comedies, fantasies, children’s stories, etc.

You can access all the stories and texts in our library…FREE…just fill out the form at the top of this page to let us know you want access!

Or you can get a Premium Subscription, and get a FILTER which will allow you to sort by genre, author, length, and so on…and even more valuable…see comments, suggestions, and warnings from the NMI staff on about about a third of the ideas. Fair warning: not all the stories have NMI comments…but many of them do.)

Here are some samples of full entries in the Library of Ideas.

A Night Among The Horses

And now he knew why he had come. He was with his horses again. His eyes, pressed against the bars, stared in. The black stallion in the lead had been his special pet, a rough animal, but kindly, knowing. And here they were once more, tearing up the grass, galloping about in the night like a ball-room full of real people, people who wanted to do things, who did what they wanted to do.

He began to crawl through the bars, slowly, deftly, and when half way through he paused, thinking.

Presently he went on again, and drawing himself into the corral, his hat and cane thrown in before him, he lay there mouth to the grass.

They were still running, but less madly, one of them had gone up the Willow Road leading into a farther pasture, in a flare of dust, through which it looked immense and faint.

On the top of the hill three or four of the horses were standing, testing the weather. He would mount one, he would ride away, he would escape. And his horses, the things he knew, would be his escape.

This is an amazing story, and belongs in some Best Short Story anthologies. It’s concerned with a young horse-groomer who’s fallen for a girl above his station in life, and on the night before his wedding, he questions whether he’d be happier staying with the horses. The prose is beautiful, the images are haunting. There’s not a lot of action, and you would have to consider how to handle all the inner monologue…but there’s something magical here.

Suddenly he stood still. Would she have any black to wear? He had thought of a joke before which all other jokes he had ever thought of were small and sick. Suppose he were to take himself out of the way and then they didn’t get the things they thought they’d have in place of him? He walked on fast–fast and crafty, picking his way among the smaller stones in between the giant stones in a fast, sure way he never could have picked it had he been thinking of where he went. He went along like a cat who is going to get a mouse. And in him grew this giant joke. Who’d give them the fireless cooker? Would it come into anybody’s head to give young Joe Doane a sail-boat just because his father was dead? They’d rather have a goat than a father. But suppose they were to lose the father and get no goat? Myrtie’d be a mourner without any mourning. She’d be ashamed to go to the cemetery.

He laughed so that he found himself down, sitting down on one of the smaller rocks between the giant rocks, on the side away from town, looking out to sea.

He forgot his joke and knew that he wanted to return to the sea. Doanes belonged at sea. Ashore things struck you funny–then, after they’d once got to you, hurt. He thought about how he used to come round this Point when Myrtie was a baby. As he passed this very spot and saw the town lying there in the sun he’d think about her, and how he’d see her now, and how she’d kick and crow. But now Myrtie wanted to go and visit him–in the cemetery. Oh, it was a joke all right. But he guessed he was tired of jokes. Except the one great joke–joke that seemed to slap the whole of life right smack in the face.

This is an amazing story, and could make for a very strong play along the lines of Arthur Miller. When a shipwreck takes the life of an immigrant’s family’s breadwinner, the government steps in and helps, as does the entire community. The cumulative acts of kindness and charity begin to rankle the head of the family next door, when the immigrants start having things which HIS family can’t afford. He begins to feel useless, and worth less than the goat which the government has provided the immigrant family. There’s a building sense of tragedy throughout the story, as in a Steinbeck novel. Some of the politics are dated, and you’d probably need to find a substitute for the actual physical goat (which might prove problematic as the goat is also a plot point), but this story is well worth your examination. It’s exciting fodder.

“I can’t disguise it any longer,” I said; “I don’t like this place, and the darkness, and the noises, and the awful feelings I get. There’s something here that beats me utterly. I’m in a blue funk, and that’s the plain truth. If the other shore was–different, I swear I’d be inclined to swim for it!”

The Swede’s face turned very white beneath the deep tan of sun and wind. He stared straight at me and answered quietly, but his voice betrayed his huge excitement by its unnatural calmness. For the moment, at any rate, he was the strong man of the two. He was more phlegmatic, for one thing.

“It’s not a physical condition we can escape from by running away,” he replied, in the tone of a doctor diagnosing some grave disease; “we must sit tight and wait. There are forces close here that could kill a herd of elephants in a second as easily as you or I could squash a fly. Our only chance is to keep perfectly still. Our insignificance perhaps may save us.”

I put a dozen questions into my expression of face, but found no words. It was precisely like listening to an accurate description of a disease whose symptoms had puzzled me.

“I mean that so far, although aware of our disturbing presence, they have not found us–not ‘located’ us, as the Americans say,” he went on. “They’re blundering about like men hunting for a leak of gas. The paddle and canoe and provisions prove that. I think they feel us, but cannot actually see us. We must keep our minds quiet–it’s our minds they feel. We must control our thoughts, or it’s all up with us.”

“Death, you mean?” I stammered, icy with the horror of his suggestion.

“Worse–by far,” he said. “Death, according to one’s belief, means either annihilation or release from the limitations of the senses, but it involves no change of character. You don’t suddenly alter just because the body’s gone. But this means a radical alteration, a complete change, a horrible loss of oneself by substitution–far worse than death, and not even annihilation. We happen to have camped in a spot where their region touches ours, where the veil between has worn thin”–horrors! he was using my very own phrase, my actual words- “so that they are aware of our being in their neighborhood.”

I forgot the shaking of the willows in the windless calm, the humming overhead, everything except that I was waiting for an answer that I dreaded more than I can possibly explain.

Two canoers find themselves marooned in a terrifying wilderness; are they being stalked by malevolent creatures, or is it only their own encroaching madness?  So ripe for the adapting by changing the location and time period!  There is a lot of mood and atmosphere and psychology here, and it instantly lends itself to metaphor as well.  (Think Get Out.)   You might consider adding a layer of personal relationship as well, of course.  And/or a comic take would also be possible.  This is one of our favorite stories in the library, and we’re hopeful many musical adaptations can spin from it.

“I want you to help me make some of that punch before dinner.”

Hurriedly rehooking her dress, she descended the stairs and found him grouping the essentials on the dining-room table. She went to the sideboard and, lifting one of the bowls, carried it over.

“Oh, no,” he protested, “let’s use the big one. There’ll be Ahearn and his wife and you and I and Milton, that’s five, and Tom and Jessie, that’s seven: and your sister and Joe Ambler, that’s nine. You don’t know how quick that stuff goes when YOU make it.”

“We’ll use this bowl,” she insisted. “It’ll hold plenty. You know how Tom is.”

Tom Lowrie, husband to Jessie, Harold’s first cousin, was rather inclined to finish anything in a liquid way that he began.

“Don’t be foolish. That one holds only about three quarts and there’s nine of us, and the servants’ll want some–and it isn’t strong punch. It’s so much more cheerful to have a lot, Evie; we don’t have to drink all of it.”

Again he shook his head obstinately.

“I AM reasonable,” she said shortly. “I don’t want any drunken men in the house.”

“Then use the small bowl.”

He grasped the smaller bowl to lift it back. Instantly her hands were on it, holding it down. There was a momentary struggle, and then, with a little exasperated grunt, he raised his side, slipped it from her fingers, and carried it to the sideboard.

She looked at him and tried to make her expression contemptuous, but he only laughed. Acknowledging her defeat but disclaiming all future interest in the punch, she left the room.

Troubled marriage played out through various scenes involving a cut-glass bowl.  Haunting and powerfully written by Fitzgerald, this story is rife with subtext and tightly-wound characters, just begging to burst into song.  It’s early Fitzgerald, and has a whiff of melodrama to it, but the psychological truths at its core ring true, a little reminiscent of Tolstoy.  An adpation might become high-drama, or gothic, even perhaps ghoulish melodrama in the right hands.