A Video Blog About Avoiding Feedback on Your Musical Script 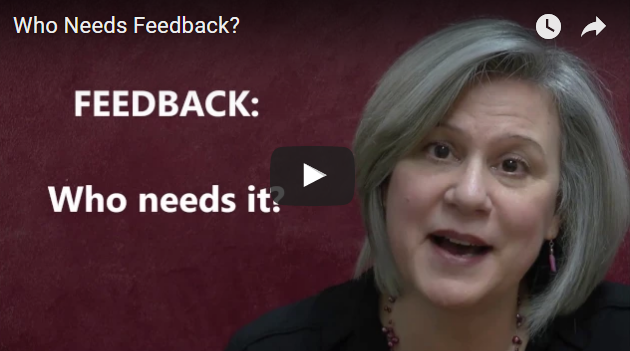 This is the first post in my video blog designed to give you the tools you need to AVOID getting FEEDBACK from me on your new musical.

Hi, my name is Elise Dewsberry, and I’m the Artistic Director of New Musicals Inc. And I’ve decided to start a new video blog.

I’ve been giving feedback to writers of new musicals for about 27 years now, ever since I founded the Script Lab in Toronto back in 1990. And I find that I tend to talk about the same concepts each time I give feedback. There are certain things that trigger me to to talk about ways that I think a musical could be stronger and accomplish its goals more fully. And so I thought it might be interesting if I started to create some video posts each month that talked about some of these concepts. So that’s what I’m going to do.

Over the next several months, every month, I’m going to release a new video blog. Just a short one, where I’m going to talk about one topic per video blog. And I’m going to cover things like the theme of your show, the wants and goals of your lead character, activating your lead character, character diction, song spotting from a book point of view, about what can a song accomplish, some of the power of a musical, how you can make use of it, activating your characters, transitioning from one scene to another, and all of these different kinds of topics that come up every time that I’m doing my feedback sessions. And the idea is that if you were to watch these vlogs, and apply these concepts, and really think about them when you’re writing your musical, at the end of the day when you submit it to me, I wouldn’t be able to give you any feedback. Because, in terms of the things that I’m looking, for everything would be working just great.

So that’s the goal — how to submit a feedback a musical to me and get no feedback. Now I’m going to be doing this mostly aimed at bookwriters who are writing the the basic story and the dialogue, but there’s going to be stuff in here that’s useful to lyricists and composers as well, in terms of how the lyrics and the music really contribute the story that you’re trying to tell, so I hope this is going to be useful to bookwriters, and lyricists, and composers.

So I hope that you’ll join me each month as I tackle another one of these topics, and that you’ll also comment and give me ideas for other topics that I could cover, or other ways that I could I could explain the things that I’m looking for. So we’ll explore this together. I hope we’ll have a good time, and that we’ll cover some really interesting stuff, and that at the end of the day, I will have talked myself right out of a job, because you won’t need my feedback anymore.

Let’s see if we can make that happen, okay? Thanks, and see you next month with topic number one!