If, as I believe, it all starts with the book, then what is the role of music in a musical?  Big topic.

The well-made Tin Pan Alley tune (usually 32 bars in four 8-bar sections with the form A-A-B-A) was the preferred popular song form in the western world from 1925 until the late 1950s.  Consequently Broadway songwriters knew what songs in a musical should sound like, especially if they wanted one or more of the songs in a score to become popular standards. 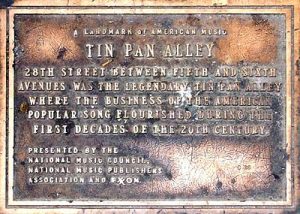 rly musical comedies of the 20s and into the 30s were an amalgamation of two popular traditions:  vaudeville and operetta.  Vaudeville provided variety with a capital V-A-R-I-E-T-Y, and operetta provided fanciful stories on which to hang the decorative melodies of Lehar, Friml, Romberg, Kern and others. During the 50s, however, popular music began to morph.

People started to lead more portable lives, probably because returning soldiers were no longer satisfied staying “back on the farm” after they’d seen a larger world.  This meant the piano in the parlor, which used to be a standard entertainment tool for American families, was no longer such a welcome piece of furniture.  It was not portable.  But a guitar is portable, and anyone who can play three or four chords can ably knock out a folk tune.  And people who don’t know how to strum a guitar can learn or teach themselves in a relative hurry, as opposed to the hours of scales and exercises needed to master the piano.  Music publishers began to push simpler music so more people could play their product.  When more people can play the song, more sheet music is sold.  The neo-folk era blossomed, reviving old favorites and creating new standards.  Rock and Roll happened, then R & B.  Country and Gospel music crept out of niche-land into pop standardville.  By the turn of the century dozens of sub-genres had emerged:  hard-, acid-, punk-rock, not to mention Ska, African and Cuban jazz, and other forms of world music.  Technology totally upended the marketing of music for listening and playing.

As it became harder and harder to create a “hit” song in a Broadway show, theatre composers turned to different agendas.  Some wanted a more operatic approach, to create more of a “score” rather than an evening of various genres.  Others wanted to stay current and popular, by using specific pop genres:  Rock musicals, pop operas, gospel scores, and now hip-hop tinged scores from Lin Manual Miranda and others.  And there are still “traditional” musicals and even operettas being presented on Broadway, shows like Book of Mormon and A Gentlemen’s Guide to Love and Murder.

How does a contemporary composer with an eye on Broadway make any sense out of this chaos?  The issue seems to be complex, but I think the answer is as simple today as it ever was.  My message to composers is:  To thine own ear be true.  By this I mean that no matter what the genre of a particular score or particular moment in a score needs to be, write that score or that moment with your ears, not someone else’s.  This is largely a question of style.  A trained composer (someone with an academic background in composition, that is) can most likely imitate any genre of music, simply by studying it and using the standard elements of that genre - ragtime, pop, hip-hop, etc.  And composers who have developed a personal style will impose it on any genre they decide to borrow for a particular moment in a show.

Untrained composers will be limited by what they can “hear” in their minds’ ears, which will most likely be imitating what they have listened to in their formative years (the way my ear was influenced by Bing Crosby and the Andrews Sisters).  Talented and untrained composers will want to evolve what they have heard into something more personal, something with their unique stamp on it.  But trained or untrained, composers need to honor the character in the moment of their shows based on what their ears tell them is right.  No two composers, no matter how similar their backgrounds may be, will “hear” a given moment for a character the same way.  Nowhere is this more evident than in the NMI Core Curriculum, where every team is asked to write a song for the same character(s) at the same moment in the same play.  And speaking as someone who has heard at least 500 ballads for Blanche DuBois, I can categorically state I never heard the same song twice.  Not every song was wonderful, and many (including mine, I can safely admit) were not even good.  Each song was as different as its creators were, right down to the young man who wrote a ballad (legato melody by our definition) for Blanche with the lyric: “Stella’s fella’s a jerk!”  He wrote that seemingly inappropriate line of lyric because his bent was comedy.

Kudos to him for sticking to his artistic guns.  Something all of us should do, all the time.

So here are some tips:

Genre songs (and pastiche scores in general) are at once useful and dangerous.  The pastiche score that gives you a ragtime number, a soft shoe number, a standard ballad, a waltzy comedy song, etc. provides the vaudevillian variety for which the American musical is noted.  Any genre you may select, however, ought to be theatricalized in the selection.  If you want a song to sound like ragtime because you want the bounce and harmonic charm of a rag, think carefully about how to use this.  Listen to the title song from Charles Strouse’s score to Rags, and you will see what I mean.  The tune is peppy and rag-like, the message is dark and depressing, very unrag-like, partly because the lyrics are telling a stark truth about the lot of Jewish immigrants in the ragtime era.  Listen to the song Real Live Girl from the Cy Coleman/Carolyn Leigh score for Little Me.  It’s a dreamy, romantic, almost corny waltz that serves to present a lyric of yearning for sex.  In fact, it’s practically the same song as There Is Nothing Like A Dame from South Pacific, but it is that idea as processed by Coleman and Leigh.  The writers of the examples cited did their job – they filled the moment of the play in terms of the character(s) and used the music they heard within themselves to do so, honoring both the needs of the play and their own personal styles.  None of this is an accident.  All of it is just good old-fashioned hard work.

I want to write more about lyrics in the next post.  However, lyrics play a large role in theatricalizing any genre a composer might choose for a theatre song.  This is especially true if the style of the music is loud and raucous, like stadium rock, where the lyric is not nearly as important as the rhythm and the sheer size of the sound.  There are moments in a musical show when the sound of the music can take over, but before that can happen, a successful theatre song needs to make its point.  And that takes words.  We need to simultaneously hear and understand the lyric, which ought to be written in the voice or diction of the character appropriate to the moment in the show.  The previous sentence is a precis of a whole course in lyric writing, one that does not even begin to address the issues of rhythm, rhyme and prosody.  Let’s let that be a teaser for the next post.

I’d like to hear from you about the theatre music that impresses you, stays with you, even haunts you a little.  If you are a composer, do you emulate this music?  If you are a lyricist or bookwriter, do you look for collaborators who write in a similar style?  I would like to know how the music you most admire impacts your work as a writer.