The First Time is Best

I’ve always loved musicals. First in the movies (I wanted to grow up to be Fred Astaire), then in summer theatres in New England (mostly in tents), and finally on Broadway. My first “legit” musical was a pre-Broadway performance in Boston in 1957. The show was Goldilocks (Book by Walter and Jean Kerr, Music by Leroy Anderson, Lyrics by the Kerrs and Joan Ford) starrin 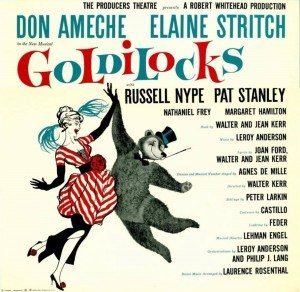 Wow – Alexander Graham Bell (Ameche) and the Wicked Witch of the West (Hamilton) – movie stars singing and dancing, telling jokes. But who the heck was Elaine Stritch – never heard of her at the time (I was 16). The musical director was later to become my mentor in the craft of writing musicals, Lehman Engel.

In 1972, I was having dinner with Lehman at the Beverly Hills Hotel one evening, and was able to ask him a question that had plagued me for years. I had loved the show Goldilocks, practically wore out the recording of the score, and wondered why it wasn’t a bigger hit (it ran only 161 performances on Broadway in 1958 and 59).

Lehman got a very puzzled look on his face, perched his glasses on the very tip of his soft nose, and said in his most Hitchcockian tones, “Why wasn’t Goldilocks a bigger success?” (dramatic pause.) “Because it was a piece of shit!”

Many of us have seen shows we liked that didn’t make it commercially. We have also seen shows we didn’t particularly care for that ran for years. My angle on this conundrum (to borrow a lovely word from Byron Schaffer, a later mentor of mine) is: That’s why they make different colored jelly beans. Lehman felt differently, though. He believed that every show is aimed at a particular audience, and any given individual may not be in that show’s sights. In other words, it’s OK if you don’t like the show – it wasn’t meant for you, it was meant for other people.

None of this, though, explains why I loved Goldilocks and Broadway snubbed it. It was my first – and we all know the first time is the best time. It dazzled me because I was a teenager and had never seen anything like it.  Just like teenagers today who go to see a new show (Spring Awakening or American Idiot, for instance) and come away gushing.  More important than whether the show I loved was a hit or not, is that it turned me on.  I went home that day and started picking out tunes on the piano.  Really.  I had no musical background whatever, but I knew what I wanted to do.  That was 59 years ago, and I’m still doing it (although I have morphed from a songwriter to a bookwriter).  I’m still doing it because I was turned on as a teenager by a charming but forgettable little show that a Broadway maven thought was unmentionably bad.  The next time you see a musical that you think is definitely a piece of excrement, remember it might be creating a career pathway for some younger, less jaded, starry-eyed kid.

A quick side note from John: “I’d love to hear about your first legit show – whether it was on Broadway, a national tour or a pre-Broadway engagement. What was the show, and what about it excited you?”

And - If someone tries to tell you he* can teach you how to write a musical, consider homicide because suicide is messy, but one of you has to die. Here is the truth: Nobody knows how to write a musical. People write them. Sometimes they succeed; sometimes they fail (at the box office). But popularity at the box office doesn’t always indicate artistic value or lack of it. Audiences are fickle. They like what they like, not what some critic or aficionado tells them they ought to like. Still, some shows manage to pass the test of time, revived again and again with box office success.

(*Note: I will try to alternate the third person pronoun, using she every other time, except that within a given paragraph or section referring to the same third person, I will stay with the pronoun the section starts with.  Capeesh?)

I don’t think anybody can tell you or me how to write a musical. But we can study how other people have written musicals. We can look for those titles that brought repeated box office success years and even decades later to see if they have things in common. This is a little like the way music is often studied, using the principles of composition from the seventeenth, eighteenth and nineteenth centuries, frequently known as the Common Practice Period.

It feels to me as if the form is changing, tending to heavier topics, often skeptical stories about the disappointments and betrayals of contemporary life, rather than the previously inimitable American optimism. So before my dotage creeps in, I have decided to commit some of these musings to this blog, in an attempt to make sense of where musicals seem to be headed. I hope readers will join the conversation and leave their comments so the discussion will not be one-sided.

I plan to study a seminal musical from each of the decades from 1920 to 2000. Many readers will (and should) argue with the choices I make from those more recent decades. That’s why they make different colored jelly beans! I’ll define “seminal” as a show that has been successfully revived on Broadway or in the West End (or both) at least once within 40 years of its initial run. With that in mind:

These choices are not based on whether or not I personally liked the shows when I saw them. In fact, people who know me will recognize two titles as my “unfavorites.” Interestingly enough, some of my unfavorite shows got into that category specifically because they do not exhibit many of the principles I recognize as belonging to the common practice period in the form from 1928 through the 1960s. It seems as if the American musical theatre is experiencing a transition that began in the 60s and continues today. A similar transition in classical music began early in the 20th century, but it was bucking a tradition of 300 years. The American musical is still not quite 100 years old, and it is fair to say it is definitely in flux today. Very traditional looking and sounding shows like A Gentlemen’s Guide to Murder and Matilda compete with shows considered ground-breaking, like Hamilton and Fun Home.

I think this mix of familiar forms and new wrinkles make today a very exciting time to be working as a writer in this form. There is clearly room for invention – in fact, there seems to be a thirst for invention. But new, old or somewhere in between, the form is still selling tickets, and not just on Broadway. Musicals old and new are filling theatres small and large across the country. In recent weeks I saw two full houses in southern California, one for a brand new musical in La Mirada (Empire) and one for a revered Sondheim classic in Thousand Oaks (A Funny Thing Happened on the Way to the Forum).

In between longer analytical blog posts outlining and discussing the seminal shows, I plan to post shorter, weekly posts detailing the most important points of craft in the writing of music, lyrics and books for musicals as exhibited in the common practice period. I hope newcomers to the form will find these posts useful. I hope “old hands” will find them familiar and comforting, and perhaps use them as springboards to newer, more adventuresome work.

Please feel free to respond to my thoughts. Agree, disagree or merely add thoughts of your own. It will be useful to compare notes. Whether we share opinions or argue positions, it’s all good. Leave your comments here, please. I look forward to the conversation.