Hmmm.  It all starts with the book, But everyone wants to come out humming the music.  Still the fact is that, since the early 1920s, the American musical has always been distinguished by the sophistication of its lyrics.  There was a lot of word play in the beginning:

SHOW THE LADIES EVERY STEP YOU KNOW
JUST RAISE HADES TILL THEY TINGLE
MINGLE TILL THEY THINK YOU’RE SINGLE
YOU CAN DANCE WITH ANY GIRL AT ALL
AS LONG AS YOU COME HOME TO ME.

Before too long, inventive imagery and irony crept in: 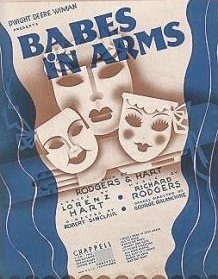 THE SLEEPLESS NIGHTS, THE DAILY FIGHTS
THE QUICK TOBOGGAN WHEN YOU REACH THE HEIGHTS
I MISS THE KISSES AND I MISS THE BITES
I WISH I WERE IN LOVE AGAIN.

The 1940s brought us the defining achievements of the Rodgers and Hammerstein collaboration with an almost perfect marriage of music and lyrics both rhythmically and in the “singability” of the lyrics over the contour of the melodies that presented them.  The organic nature of the lyrics, often growing seamlessly out of the dialogue, spawned many imitators, right up to the present day.

1942:  (from Oklahoma, book and lyrics by Oscar Hammerstein II)

LAUREY
Well, you jist can’t go around kissin’ every man that asts you!  Didn’t anybody ever tell you that?

ADO ANNIE
Yeow, they told me…

IT AIN’T SO MUCH A QUESTION OF NOT KNOWIN’ WHUT TO DO
I KNOWED WHUT’S RIGHT AND WRONG SINCE I BEEN TEN.
I HEARD A LOT OF STORIES – AND I RECKON THEY ARE TRUE –
ABOUT HOW GIRLS’RE PUT UPON BY MEN.
I KNOW I MUSTN’T FALL INTO THE PIT
BUT WHEN I’M WITH A FELLER – I FERGIT!

Rodgers and Hammerstein continued to experiment and refine their crafts as their collaboration labored on, striving to make the words and music work together to illuminate the moment.  Listen to the plea in Lady Thiang’s voice in both the music and the words to the song Something Wonderful from The King And I (also book and lyrics by Oscar Hammerstein II):

1951:  HE WILL NOT ALWAYS SAY
WHAT YOU WOULD HAVE HIM SAY
BUT NOW AND THEN HE’LL SAY
SOMETHING WONDERFUL…

The fall and rise of the melody successfully mimics the fall and rise of a voice begging for more understanding from a listener.  In this case, the listener is Mrs. Anna.  Lady Thiang is asking Mrs. Anna to be tactful, to help the king manage international relationships without suggesting that he actually needs help.  Her advice mustn’t sound like advice.  Further, Mrs. Anna must go to the king, not wait for him to ask for her help, something he is far too proud to do.  Lady Thiang realizes she is dealing with two very strong personalities and that she must be diplomatic in her request.  The song, and its placement in the scene, is a marvel of craft, and well worth studying.

The lyric to a theatre song, and the way the music presents the lyric must be carefully crafted to convey the moment.  In its diction, the lyric needs to reflect the character’s capacity for language, while honoring whatever social restrictions the setting and other characters present place on the singer.  The best theatre songs focus on a single topic (like The Surrey With The Fringe On Top) and yet this topic is not always what the song is about (Surrey is about Curly trying to get a date with a Laurey – the Surrey is merely a means to an end.).  Unlike dialogue, the lyric needs rhythm and rhyme, and these elements need to be present in an organized way that literally helps the audience understand both the topic of the song and the reason it is being sung.  Making it possible for the audience to hear the lyric is not nearly as important as making it possible for the audience to fully understand the lyric instantly, without reflection.  That understanding needs to transcend the mere meaning of the words and achieve the greater impact of the subtextual information and thematic thrust of the moment in the show.  The craft of writing lyrics carefully and thoughtfully to achieve emotional truth and serve the character in the moment is what makes this transcendent understanding possible.

It is the craft of lyric writing that makes it possible for the audience to instantly and fully understand the emotional moment for the character.

The lyric must be written in the voice of the character.  Every character has a unique speech pattern, and the lyric should reflect this.  Where was the character born?  What education does the character have?  What social position does the character enjoy, aspire to or strive to escape?  (Study Adelaide’s Lament from Guys And Dolls, lyrics by Frank Loesser.  The woman is trying to educate herself, but ultimately relies on her own common sense to sum up what she is learning: “In other words just from waiting around for that plain little band of gold, a person can develop a cold.”)

The lyric must attend to the social moment of the character.  Characters adjust their language according to the circumstances.  Think about Eliza Doolittle in My Fair Lady (book and lyrics by Allan Jay Lerner), striving to pronounce everything properly at Ascot, but losing control during the race to shout “Come on, Dover, move yer bloomin’ arse!”  Eliza couldn’t contain her excitement during the race, but earlier in the show she is forced to stifle her anger and must wait until she is alone to vent in the song “Just You Wait, ‘Enry ‘Iggins!”

The lyric must reflect the character’s thoughts and feelings in the moment of the play.  At the end of the first act of Gypsy (lyrics by Stephen Sondheim), Herbie asks Rose to marry him and settle down.  Louise begs her to say yes.  But Rose, angry at June’s desertion, is determined to forge ahead.  If she can’t make Baby June a star, she’ll make Louise a star.  “You’ll be swell, you’ll be great, gonna have the whole world on a plate!”

The lyric has to do all of this work within the constraints of the musical form chosen by the composer.  There are very few syllables to a line of lyric, so it is not wise to waste one.  The hearability and understandability of the lyric is affected by orchestration,, choreography, swirling costumes and mechanical scenery.  With all those elements competing for the audience’s attention, the lyric has to emerge clearly so the patrons can simultaneously hear and understand the lyric in the voice of the character in the moment of the play.

There was a time when lyrics did not need to flow so seamlessly from the dialogue, when two people could have a “cute meet,” hear a bell tone in the orchestra, and launch into a charming love-at-first-sight tune.  We’ve grown past that.

We seem to have also grown past metaphor and simile at times to a state where specificity is rooted in reality – harsh, unromantic and filled with expletives, like this example from Next To Normal (book and lyrics by Brian Yorkey):.  “Mozart was crazy, flat fucking crazy, batshit I hear.”  Over my career I have watched our society lose its innocence and insouciance the way the characters In La Boheme do when Mimi dies.  During World War II and its aftermath, we felt indestructible.  We were optimistic.  We knew things would get better and better as time went on.  Somewhere along the way we became skeptical, and we now feel as if things are changing for the worse, not the better.  The American psyche is having a dark night of the soul, and this is reflected in our musical theatre as well as other aspects of our lives.

Fortunately, Americans can’t seem to stay sulking in the dark too long, and the culture’s original impulse to optimism and cheerfulness continues to express itself in our entertainment media.  On Broadway today:  Aladdin, American In Paris, Kinky Boots, She Loves Me, Something Rotten, Book of Mormon, The Lion King, and Wicked.  These are only a few of the current shows, a list slanted toward those on the humorous and romantic side, away from the more dramatic musicals like Fiddler on the Roof or The Color Purple, and avoiding non-American musicals.  So whether it’s a revival or a new work, the American musical is alive and well on Broadway, and sometimes the lyrics shine with sophistication, wit and occasional wisdom.

At my advancing years (nearly 75 now) one of my favorite lyrics is from Milk and Honey, 1961, by Jerry Herman:

LET’S NOT WASTE A MOMENT, 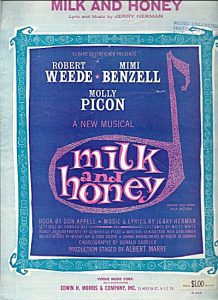 LET’S NOT LOSE A DAY;
THERE’S A SHORT FOREVER,
NOT TOO FAR AWAY.

WE DON’T HAVE TO HEAR THE CLOCK REMIND US
THAT THERE’S MORE THAN HALF OF LIFE BEHIND US,
WHEN YOU FACE A SHORT FOREVER.
THERE’S NO RIGHT OR WRONG;
I CAN ONLY FACE FOREVER,
IF YOU COME ALONG.
I CAN ONLY FIND MY WAY,
IF YOU’RE THERE TO LEAD ME ON;

SO LET’S NOT WASTE A MOMENT,
OH, LOOK, ANOTHER MOMENT’S GONE!

I remember hearing that lyric in the Colonial Theatre in Boston at the tender age of 20 (sung by Robert Weede to Mimi Benzell).  I understood it completely then, and I definitely understand it now, that I, too, don’t need to hear a clock remind me that there is more than half of life behind me.  It hasn’t lost a particle of its truth in the intervening 55 years.

I’d like to hear from some of you about your favorite lyrics, words that moved you in the safety of theatre and continue to speak to you now, in the harsh light of reality where for 50 people forever can be very short indeed.